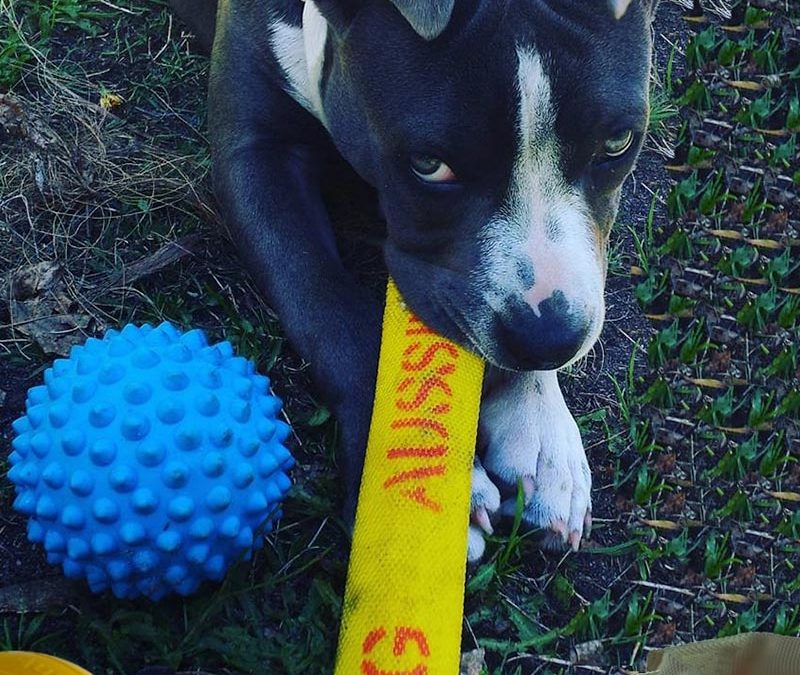 The games puppies play with litter-mates consist mainly of tussles involving biting one another around the head and neck. Of course, when they leave their litter and we become their playmates, they attempt to play in the same way! Puppy needs to learn that the way to play with us is through toys.

Watching a litter of puppies play, you might occasionally observe one puppy biting his sibling too hard. The injured party yelps and there is at least a momentary, if not semi-permanent, interruption to the game. The sharp yelp interrupts the biter’s behaviour. The following interruption or end of play encourages the biter to inhibit his bite in future, in order to avoid such interference with his games.

Puppies will lose these needle-sharp baby teeth around four to six months of age. Let’s ensure that you gain the designed benefit before that time. The puppy must have learnt to inhibit his bite before he has big adult teeth and a strong adult jaw to match.

Imitating the puppy litter scenario will assist your puppy to further inhibit his bite on you. As soon as you feel teeth on your skin, whether it is causing pain or not, emit a puppy-like yelp or the human equivalent, a sharp “yow”. Stand up and walk away from the game. This type of bite inhibition learning is for long-term effect. It may not always help you in the instant that the nipping or biting is occurring, particularly if young children are involved. The Control Exercise or Time-Out (see below) can be utilised for over-excitable puppies.

When playing or interacting with your puppy, ensure that a favourite puppy toys are at hand – you can use it as a substitute for your hands or limbs. Encourage the puppy to bite the toy. It may prove difficult at first, as the puppy continues to pursue your hands. Simply manoeuvre your hands and the toy so that teeth connect with toy, more often than hands. Puppy needs to learn that playing with humans involves toys instead of nipping and biting flesh. When the game is over, put the toy up out of puppy’s reach. Next time you want to play, puppy will be keen to play with your toy. However, leave plenty of chew toys lying around.
Ankle biting

A common problem spot for ankle biting is walking up and down stairs or along a hallway. It is commonly the movement that excites the puppy in these scenarios. Keep a spray container of water at each end. When the puppy launches himself for ankles or pants legs, stop your movement and squirt (jet spray, not mist). Alternatively, stop movement and apply the control exercise.
The Control Exercise

The control position (or heel position) is the puppy sitting, parallel to the owner’s left side and facing the same direction. By taking the lead in the right hand, short down near the clip or by pushing two fingers of the right hand through the front of the actual collar, your left hand remains free to swing the puppy’s bottom into the correct sitting position. You have control of the puppy at both ends – he no longer has choices.

The very moment the puppy’s bottom arrives in the correct position, the tension must be taken out of the lead or grip on the collar, even if that means the puppy immediately attempts to launch-off again. The owner must be “spring-loaded”, ready to block the puppy from achieving any success. Restraining the puppy on a tight lead or with a constantly tight grip is not going to achieve our required outcome of having the puppy give the control over to you. Food rewards can be used, though as a general rule, I find the exercise more meaningful as an out and out control exercise.

The puppy will only regain his freedom, when he has given up any fighting or struggling and has handed control over to you, for at least ten seconds. The control exercise is rather dull to an active puppy. Once experience shows them just which behaviours result in the boring old control exercise, they will actively avoid those behaviours.

As a general rule, children 12 years of age and under do not possess the physical co- ordination to perform this exercise effectively. Allowing them to attempt the exercise and resulting in the puppy “winning” is not a good thing for anyone!

When the puppy has really lost control and the excitement of biting and nipping is just too much, a time-out may assist. Parents can implement this exercise when interacting puppies and young children. It is usually too difficult for the child to utilise for themselves.

Always use the yelping response to any biting or nipping whether it appears to be helping or not. Remember that it will achieve a long-term learning effect. When the puppy will not settle, a time-out can be applied either in the control position or by removing the puppy to the laundry or outside the back door (wherever he is familiar).

Puppies will lose those needle-sharp teeth around five to six months of age. Ensure that you are providing plenty of chewing material to help loosen the teeth and to soothe the puppy. Soft, spongy toys are usually preferred by puppies at this age. Use the harder type chews when they have their adult teeth and a strong jaw to match. Including bones in the puppy’s diet may also help in providing something more appropriate to chew on.

Play, Play and Then More Play

Play is so important for the puppy’s development and for relationship building and bonding with his new family. Play is a means of helping puppies to develop impulse control and tolerance of frustration – similar to a two-year-old child.

Providing numerous different toys will stimulate the puppy’s interaction and development. Put some toys away so that you can swap them around to provide variety.

Despite previous “bad press”, tug-o-war is one of the most beneficial games you can play with your puppy. It will aid in developing responsiveness to you and your commands. Tug-o- war does not encourage aggressive behaviour! IT DOESN’T MATTER WHO WINS OR LOSES! Hard rubber tug toys are not suitable for puppy teeth; use soft toys or a piece of towelling.

Developing the retrieve of a ball or toy can be assisted by sitting in the doorway of a room with the puppy chasing the item into the room. Once he has picked up the toy, he will have nowhere to go but back to you. Training can be further assisted by the use of a long line attached to the puppy’s collar to enable you to block incorrect responses. A puppy that has not learnt to retrieve by 16 weeks of age is not likely to enjoy the game throughout his lifetime. What a shame that would be!

Attaching a cord or string to a toy can enable you to make the toy more stimulating to the puppy and also establish a habit of returning to you with the toy. To train the puppy to release the tug or retrieve toy on command simply say the command, “leave”, and then offer a food treat to the puppy. Hopefully he will release the toy in order to eat the treat. Further reward him by re-initiating the game after he has finished eating.

Alternatively, if the puppy is not keen to give up the toy for a food treat; gently hold your hand on the toy without pulling and with your other hand lift the puppy by his collar just off his front feet. You may have to quietly hold this position for a few moments until the puppy gets bored and releases the toy. At which point, you praise and re-initiate the game. You must remain calm, non-competitive and non-threatening throughout the process.

Show your puppy that fighting and struggling with you will not achieve success for him; but working with you achieves huge success! Rough-house play is also wonderful for developing puppies. Children may also engage in rough-house play if they are confident to do so. A responsible adult must supervise all interactions between children and puppies. Neither has fully developed emotional self- regulation.

×
Item Added to your Cart!
Continue Shopping
Which Aussie Dog Product is best for your dog?
The Aussie Dog Zoo Range

Our mission is to produce fun, interactive enrichment and training products for animals of all shapes and sizes. What kind of animal do you need an enrichment product for? 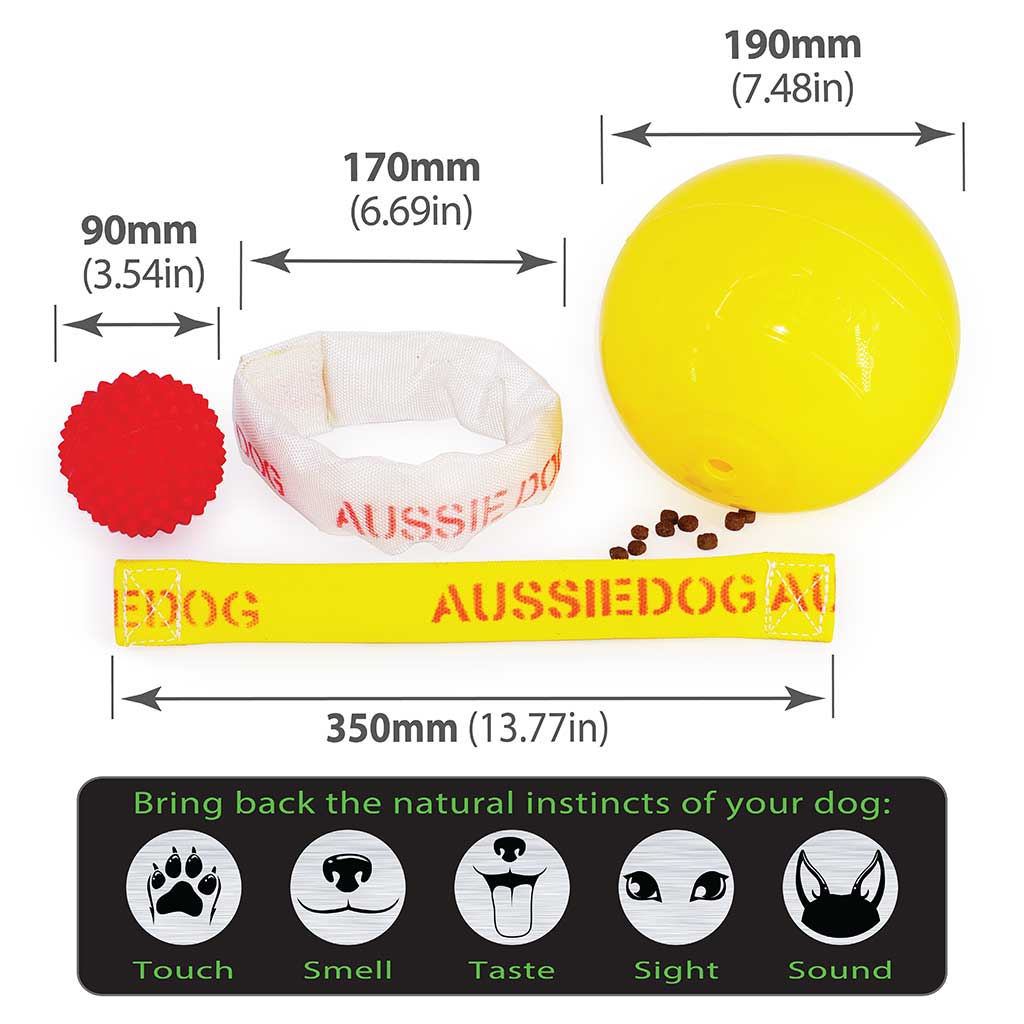